I had a positive social media experience this week (...I know right?!). Someone with a large public following had posted an open question about a controversial topic - transgender participation in sports - and was immediately swamped with feedback from across the spectrum.

I flicked through the comment section, as we tend to do when we know there'll be fallout, and spotted a name I knew. This person had expressed an opinion, refuting the idea that gender was a social construct.

I sat on this one for a minute. On one hand, I disagreed, and felt the familiar flutter of annoyance in my gut. On the other, I knew this person, and I know they're open-minded and intelligent.

After some deliberation, I posted a careful response, to see how it would be received. Here's what I wrote:

Then, I waited... and a few minutes later, I got a positive reply. 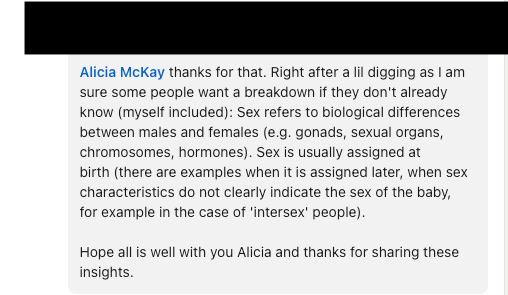 How good is that? This person read, thought, researched, and reported back. If that's not a rarity in social media land, I don't know what is.

I've thought about this exchange a lot since. Irrespective of your views on gender diversity, this example is an interesting one.

Social media, typically the domain of the keyboard warrior and contrived controversy, became a positive place for discussion and learning.

Why did this go so well?

I think there's a few things in it:

- I knew the person in real life. There was reduced chance for bad behaviour, as we'll see each other again and need to face up in person.

- I wasn't trying to be smug, or mean. I've learnt a lot about this topic recently, and realised how under-informed I was. I wasn't judgemental of the misconception, because it's a common one.

- I was friendly. I assumed positive intent, and that was reciprocated.

- There was a useful narrative weaved in that could be used to justify a change of mind. "It's an easy mistake, assuming our bits and brains would line up, but here's what I've discovered that's changed my thoughts"

I'm not trying to blow my own trumpet here - this could just as easily have gone poorly, and I don't necessarily expect to replicate these results! What matters the most in this exchange, I think, is there was room left for dignity.

It's all very well to disagree, educate or reflect - but if there's no way to leave the conversation with dignity, why would anyone choose not to double down or defend?

I've got a longer piece coming on this, about how we have hot-topic conversations with others when we have personal feelings on the matter, which I'm hoping to release later this week.

In the meantime, I hope this has provided some useful thoughts for your Wednesday.

How to Make Your Problems Useful

I thought I lost my WHY