Endings: Letting go of the good

Last week, I wrote about beginnings, so it seems only fitting that this week, we talk about endings. Because, unless you're an immortal with unlimited time, energy, money, and giving-a-shit... you don't get one without the other.

Ending bad things makes sense. Why would you keep doing something that sucks? We might find it hard to leave a bad relationship or a bad job, but we know we need to, and eventually, we get there.

It's harder to end things that are good.

Henry Cloud nailed the best analogy for this in ‘Necessary Endings’ when he talked about pruning rosebushes.

Rosebushes produce more buds than they can sustain and require regular pruning to be healthy and thrive. Cloud distinguishes between three types of pruning – the first is to remove dead branches. These branches are no longer contributing,  and are taking up space that makes it harder for the others to grow. Easy. The second is to remove sick and diseased branches who are unlikely to recover and are taking energy away from healthy branches. Not bad.

The third type of pruning, though, is the removal of perfectly healthy buds. Having too many ‘good’ buds prevents the rosebush from totally thriving, by directing energy away from the buds that have the potential to be great. Without this critical third type, your rosebush will never be fabulous.

Like rosebushes, people produce more 'buds' than they can possibly sustain. We have so many good ideas, potential projects and plates spinning, and it's hard to put some down. They all could be great! Yes, they could be. But they won't be, if we try to do them all.

In Not An MBA, we recently looked at the Zone of Genius model, as explained by Gay Hendricks, author of The Big Leap. The basic idea is that we want to spend as much time as we can doing awesome stuff, and get rid of things we're mediocre at - nothing new there. The thing I most like about this model, however, is how clearly it spells out the danger of the Zone of Excellence. 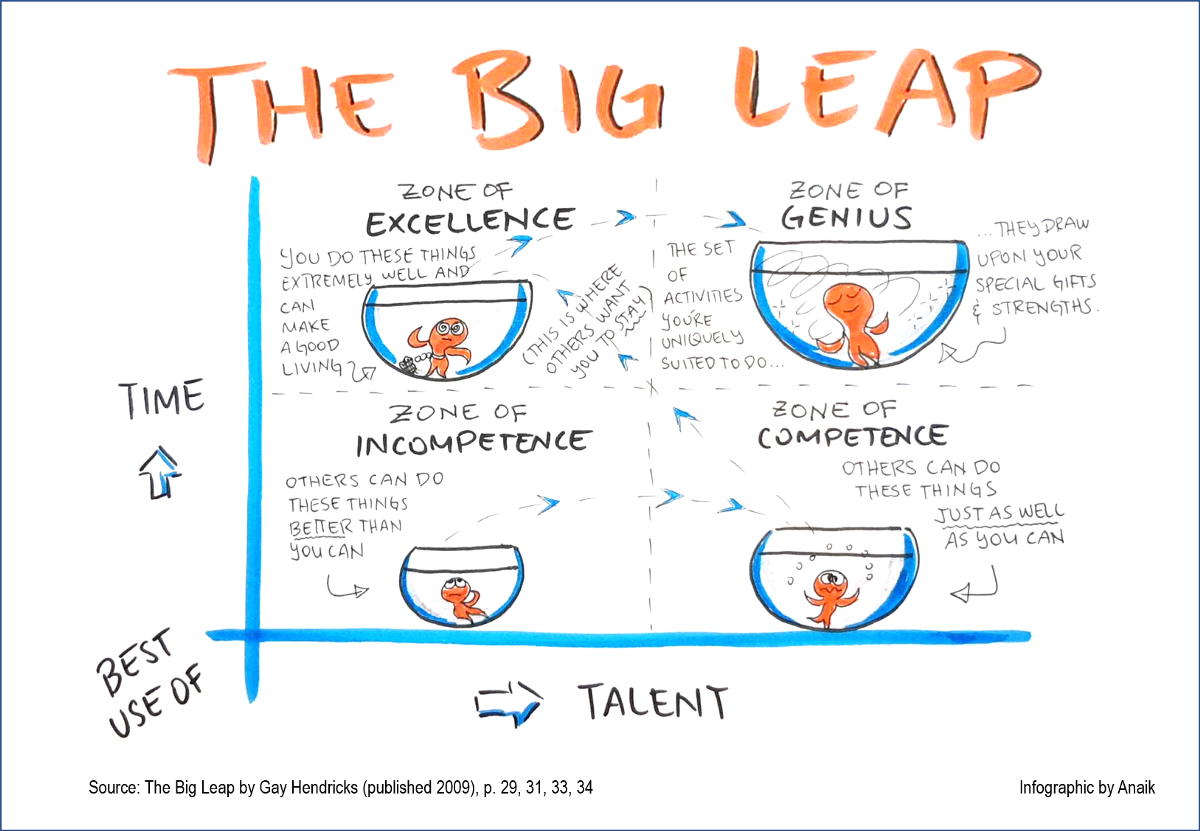 The Zone of Excellence is very alluring. It's often well-paid, and it's where other people would like you to stay. In the Zone of Excellence, you're doing things you're really great at, and you're being rewarded for them. So why would you want to spend any less time there? Because it's preventing us from our genius.

When yes becomes no

Covering this idea in Not An MBA is very meaningful for me. I've had to say no to lots of the stuff I'm really great at this year (strategy workshops, leadership coaching, personal mentoring) to be able to say yes to putting together my proudest achievement yet - an incredible programme where I get to be my best, and bring my best, to help the best people become even better.

The reality is, every time you say yes to things that sit in your Zone of Excellence, you say no to the space and opportunity to explore options that would be truly fulfilling, where you contribute your unique gifts to the world and feel bloody good about them.

We can think of our Zone of Excellence as our metaphorical 'good' rosebuds - it's those things that will hold us back, not the dead ones.

TL; DR At a certain point in your career, it's not incompetence that holds you back. It's the trap of your own excellence.

So, what perfectly healthy things do you need to prune, to get to great?